What do you think about the American Civil War, and more specifically about the Confederate States of America:-)? Theyfought really bravely?

What do you think about the American Civil War, and more specifically about the Confederate States of America:-)?

What do you think about the American Civil War, and more specifically about the Confederate States of America :-)

They fought really bravely, though the ideas they fought for

I am a Pole, I also live here a lot of refugees from our national uprisings against the invaders, i.e. the Prussia / German Empire, Austria / later Austria-Hungary and the Russian Empire, a lot of emigrated to the Americas to Brazil and Argentina, but quite a lot to the United States, the largest communities of Polish Americans are in Chicago and New York quite a lot of Poles fought bravely in the Union Army, although Poles, like other immigrants from Eastern Europe, were offended by other Americans, but apparently, the same fate had the Irish, Italians and Jews :-)

But Polish Americans from Poland and other immigrants reportedly fought really bravely for Lincoln, but recently I read a very interesting study about Polish Immigrants who settled in the southern parts of the United States and when the Civil War broke out they fought in the service of the Confederation, although the entire secession was racist and anti-Catholic and anti-Semitic, and the immigrants from Poland were the majority of either Catholics or Polish Jews :-)

But apparently, there were about 500 Poles who fought for the Confederation, as a lover of history and....

military, I must admit that the Confederation fought really bravely in the first phases of this war and the commander-in-chief of the Confederates, that is, the Chief Commander was, of course, Jefferson Davis, but their military commander, General Lee, even gained Bismarck's attention and Prussia and later the German Empire and Germany to true masters in war ;-)

And the Confederates had a nice anthem https://www.youtube.com/watch?v=BDg1UG5Dwa0 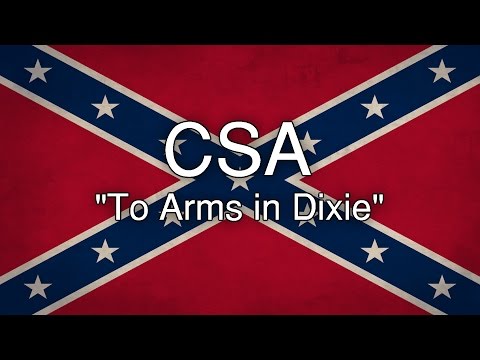 Iwonder how world would look if CSA won not USA?:)

Or how the imperial troops treated with a volley of heavy machine guns, it was the end of an era, the end of brave knights/samura on horses, from then on soldiers will kill themselves on an industrial scale, not as a preview of what will happen during WWI&II

"They did fight for slavery. They fought to secede from the Union as they had a Constitutional right to." Could you explain?