At 1:55 she didn't explain when transistor is off, why current through primary reverses direction. We know if battery is cut off and load remains connected, inductor will always keep the current going in the SAME direction. When transistor breaks the circuit and inductor has no other way to discharge i assume current now goes in reverse (to charge the cap). 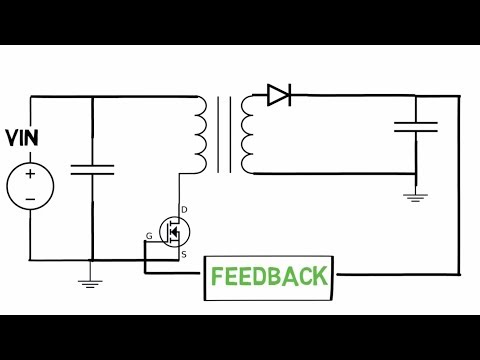 "The windings in the circuit shown are so wound that if primary current is top to bottom, then secondary is bottom to top." i dont understand how is that supposed to be, i mean, current induced in the secondary will always be in opposite direction to the primary, no matter if it's wound CW or CCW, Lenz's law.

And thus your other point about the core delivering energy to the secondary, forward biasing the diode is also not clear, when mosfet is off, flux in a core is still in the wrong direction

Little correction there, magnetic field will always be such to oppose the primary, but current direction will depend on whether its CW or CCW wound.