Hey, Versus' hockey highlights are advertised on Comcast's On Demand now. And I see that (damn) Amp Energy drink commercial with Ryan Miller on like 20 channels. (Well, maybe not 20. I don't watch that many. I don't even watch that much TV... But it's out there!)

2nd QUESTION: Do you agree that hit is the best all-time? If not, what hit was better? (Remember, I love YouTube links. Lol.)

JENNI - Yeah, I was wondering how they picked from all his hits?? Lol. The one on Lindros was pretty brutal as well.

TUNA - Holy cow, I never saw that last one. That was a total BS call...

(Was that Pierre Maguire I heard commentating?? How could you do this to me??)

TUNA - By the way, I hopped on the Phaneuf wagon last season. This season, when the Flames played the Pens... I realized I would NOT want to see a Pens/Flames SC final. Sidney Crosby tried this puck-protection move on Phaneuf that he's usually successful with (Sid's pretty strong down low) and Phaneuf knocked him right on his butt instantly. There's not too many players that contain Sid that well.

Phaneuf gets called a punk or whatever, but he just tries not to take penalties after someone gets mad because he makes a big hit. (Hmm, I do think I'd like to see him drop the gloves more during the regular season though.) People already hate him---that's how good he is and how good his hits are.

TUNA - Oh, I didn't mean that I wanted Phaneuf to drop the gloves to prove anything or so he's accountable... I just want to see him destroy someone for my personal entertainment. Haha.

TUNA - There didn't used to be. I consider Forsberg one of the MASTERS of cheapshots over the refs. Lol, seriously. I saw him do it a few times last season. Even in the playoffs, when he played for Nashville, he got a good punch in on a guy over a ref. (Psssht, Steve Downie did that to Jason Blake this season and a lot of people almost had heart attacks.)

Sidney Crosby's welcome to the 2006-07 season was Forsberg sticking him in the face over some refs: http://youtube.com/watch?v=Ldg5NqpXAmA

(I love how he's talking to Sid and starts to ease up his grip... than makes one final attempt to kill him. Ahaha.)

If you're hatin' Forsberg a lot particularly one day, watch this: http://youtube.com/watch?v=IVZzL_57C48 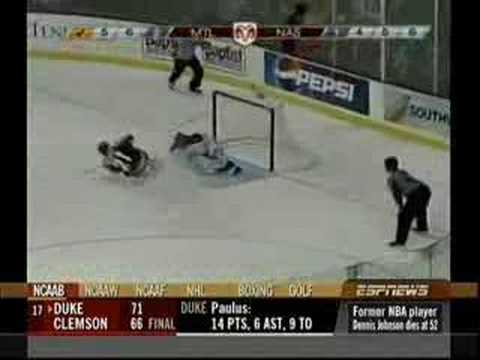 ZAPCITY - YouTube IS something else. I do remember the Kapanen one, especially all the falling.

Anyway, you said dirtiest hit which is ironic because I was going to bring up Kasparaitis. I'm sure a handful of his would be good nominations. (Though personally, Ulf Samuelsson on Neely is THE dirtiest I've ever seen.) I couldn't help but think of this one from Turin, which I think is actually clean: http://youtube.com/watch?v=LjW7qK2BiBo 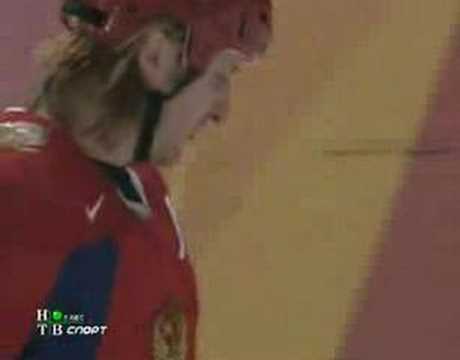 Hip-on-knee. I remember seeing all kinds of pictures of Gagne flying through the air.

But oh man Zap, there's too good of a chance that the Pens will play the Rangers in Round 2. I'm wary (especially of Lundqvist and NY's D) and yet really excited. LITY asked a question about whether or not Avery could contain Crosby & Malkin and all the answers got me pumped up for that showdown. If that's the matchup, I'll have to obnoxiously send you Sidney Crosby highlight videos before the series starts. :P