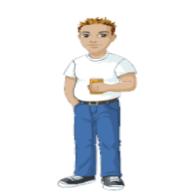 I am a Catholic, practising Christian, and live in Sydney Australia. I work in IT, supporting the ERP computer system in a large Australian manufacturing Company. I don't believe in Global Warming, or Socialism.