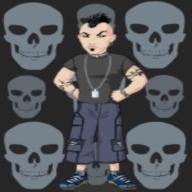 I'm blunt, get over it

Yes I am a conservative. Both a social and a fiscal conservative. I believe in a flat tax, I believe in the right to bear arms and the right to arm bears if you need to. I believe in Life, Liberty, Property, and the Pursuit of Happiness but not the garantee of it. I am not a great speller and I hate puntucation. I believe that one day all of us will have a loved one saved by an "over payed" doctor who is part of the "corrupt" health care system, and in that moment we all realize that doctor is worth every penny. (thanks for saving my fathers life doc.) I believe in freedom of religion. EVERY RELIGION, I do not care if you are Christian, Jewish, Wicca, Muslim, Hundu, Buddhist, Athiest, Jedi, or anything else. this is america and you are free to be that. I believe in the rights of Homosexuals to be married, and I do not support the death penalty. I am a die hard 49ers fan, I love golf and my wife, my country my family and my dogs.