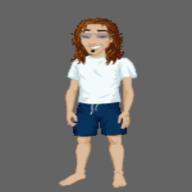 Where's all the black hair gone? Anyway so some asshole saw fit to get me suspended - at least I got to 5000 points with 8% Best Answers. So here's looking to my rebirth with brown hair and let's see how things go. :) (I've deleted the Bulger question because I don't want to drop the source in it. Also people are reacting OTT already. I have an excellent source but things have a way of getting out of hand sometimes).