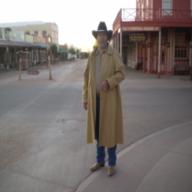 I am Veteran of the United States Air Force, and believe the old saying; "God, Guns, and Guts made this country great." I also have a strong love of God, Country, and Family, and am not ashamed to admit it. Some would call me an extremist. Well. if this makes me an extremist, then so be it. I'll be proud to be one. We are becoming a nation that doesn't realize what earlier generations went through so we could have the life we have today. As a result, we are seeing this country become something the Founding Fathers would not recognize. I do not formally associate myself with either the Republican or Democratic parties, but because of state laws, I am registered to vote as a Democrat. I do believe that Conservatism is the way to go, in order to return respect, and prosperity to the United States. We should not worry about what the rest of the world thinks of us. We are becoming a nation that asks for respect, when we used to command, demand, and get respect.