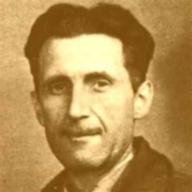 I am a democratic socialist, anarchist sympathizer as well as a swift opponent of totalitarianism, and skeptical to faith And now two sayings to best remember: "One does not establish a dictatorship in order to safeguard a revolution; one makes a revolution in order to establish a dictatorship." "Every war when it comes, or before it comes, is represented not as a war but as an act of self-defense against a homicidal maniac."