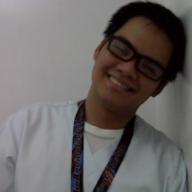 I'm not where I need to be, but thank God I'm not where I used to be. Love and forgive. Simple lessons that are harder to apply compared to a dual college degrees.