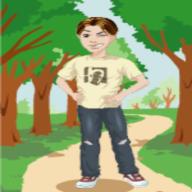 I have a website that I just started at http://www.myvancouvertoday.ca I'll try and stop by here every now and then to ask and answer various questions concerning the province I live in so I can get more of a handle on what people want to know and would like.