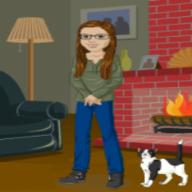 As many of you know, I am a respiratory therapist. I work in the VA hospital in my MO hometown. I live a simple life with 4 much loved cats, many wonderful friends and a loving family.