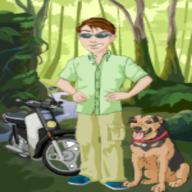 I'm a 29-year-old Environmental Scientist with a BA in astrophysics from UC Berkeley and an MS in physics from UC Davis. http://www.college-admission-essay.com/ucberkeleyadmission.html http://www.college-admission-essay.com/ucdavisadmission.html I've done a lot of research on global warming and am very passionate about the issue. I've also researched alternative fueled vehicles very extensively. I own a Prius and commute to work via bicycle or electric scooter. And I just leased solar panels on my house from Sungevity. http://www.sungevity.com/ I'm by far the top answerer in the Alternative Fuel Vehicles and Global Warming sections. Feel free to email me with questions on those subjects. I also help run a climate change discussion forum. Stop by and check it out, and feel free to ask questions there! Honestly it's a much better place to get accurate information on climate change than Yahoo Answers. http://greenhome.huddler.com/forum/list/5582